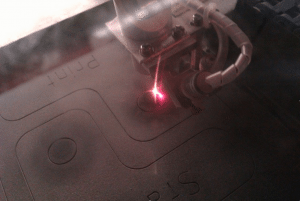 3D printing technology has gained more and more space in various branches of industry. Whether developing prototypes, finished parts, or specialized, individualized tools, printer 3d reduces large-scale production times and costs and are definitely transforming the logic of industrial processes. Technology has starred in what became known as the New Industrial Revolution or Industry 4.0. Among the many advantages this technology can offer to the industry, we’ve made a list of the top five.

Prototyping from 3D printing processes is a technique that industries have been using for about 20 years. But it was only recently that these prototypes became so real and so interactive that they were even confused with the final versions. In 2014, for example, local automaker Local Motors caused a furor at the Chicago Industry Show when it printed a unique car prototype in 44 hours. In one piece, the printer produced the chassis and body, and later the assembler team added the other parts manually. Another more recent case is that of US sports and fashion company Under Armor, which launched to the market a prototype tennis shoes totally manufactured by means of a 3D printer. 3D prototyping enables industries to manufacture much more realistic parts, increasing the predictability of errors and ensuring that products reach the market faster.

The ability to print very complex parts at once, with the exact amount of raw material needed to make them, is one of the great advantages of 3D printing. In the aerospace industry, for example, where raw materials are very expensive, this implies a considerable cost reduction, avoiding waste. In addition, the high design accuracy allows perfect fitting of replacement and maintenance parts, saving time with adjustments and correction. We recently presented a case where an offshore aircraft was maintained thanks to 3D printing technology, which demonstrates all the agility and versatility of this process and the excellent cost-effectiveness of choosing this solution.

One machine, many materials

And speaking of economy and agility, we cannot fail to cite this great advantage of having a 3D printer in industrial processes. In traditional manufacturing, it is often necessary to invest in various machines to operate different materials, which implies high costs and increased production time. With 3D printers using FDM technologies, it is possible in a single process to work with various raw materials, making manufacturing much more practical. In addition, media can be colored in the print tray itself, requiring less manual procedures. The tendency for the near future is to broaden the spectrum of 3D printable materials. That’s one of the reasons GE has invested millions in this technology this year.

Few things attract more customers as the concept of exclusivity and 3D printing offers the possibility of producing custom parts. The industry sectors that benefit most from this 3D technology capability are the jeweler, prosthetist, and apparel. At the end of 2015 Adidas developed an initiative called Futurecraft, which consists in the production of running shoes with a custom-made 3D printed sole for the customer. Through 3D design technologies the consumer will be able to walk into the store, run a little on a treadmill that captures the dynamic design and shape of the footstep, and have printed an exclusive sole for his footsteps.